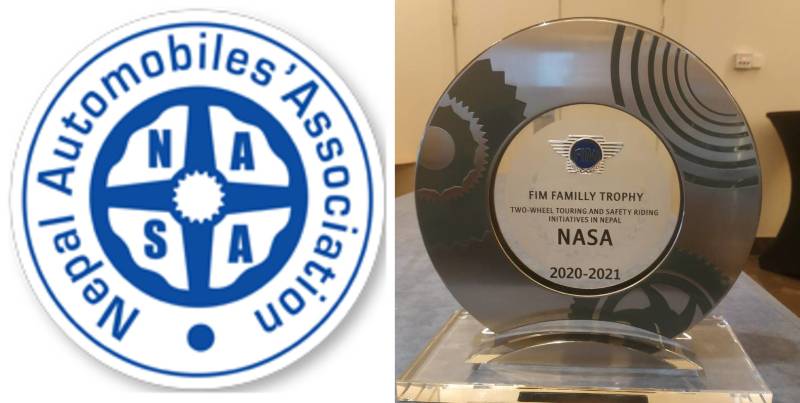 The trophy, presented by selecting one of the best national sports associations from around the world, is based on a project that has a world-class impact, such as a new concept, special campaign, innovation, and historic achievement.

The award is based on an association that provides training to young people in the field of motorcycling, promotes and conducts competitive programs, improves motorcycling safety, and improves the sustainability of motorcycling.

After receiving the trophy, now the attention of motorcyclists from all over the world will be drawn towards Nepal, said Bhattarai. Nepal will be a new and attractive destination for them. FIM will also facilitate various activities in this regard.

Awards were also given in various other world famous genres at the FIM Awards Ceremony held in Monaco. The awards ceremony, held in the presence of Prince Albert II of Monaco, saw the distribution of prizes for both 2020 and 2021. Last year's award could not be distributed due to Covid-19, so it was distributed this year.

The award was presented by FIM President George Viegas and other dignitaries.

Third MOTORCYCLING CONFERENCE has been conducted by NASA Nepal on October 1 and 2. The conference titled Safety, Sustainability and Two Wheel Touring was attended by more than 150 people over a period of 2 days.

The conference was coordinated by the Mountain Sports Federation & supported and promoted by Federation Internationale de Motocyclisme (FIM) and the Nepal Tourism Board(NTB) . The main sponsor of conference was Suraksha Lubricant.With more than 3 million motorcycles and scooters in Nepal, there was no consensus on their safety and benefits which was discussed on the conference. The conference focused on Motorcycle Safety, Motorcycle Tourism Promotion, Two Wheel Touring through Regional Events, Motorcycle for Women's Empowerment, Cooperation in Tourism Board and Adventure Tourism, Proposed Two Wheel Touring Destinations, Touring Marshalling, Licensing Arrangements, Helmet Testing and Quality Helmets, FIM, NASA Nepal, WIMA Nepal and Motorcycle Sports and Nepal. Also, more than two dozen two-wheeler touring destinations in Nepal were announced.

Similarly, members of Nepal Tourism Board Nawang Nima Sherpa, General Secretary of NASA Nepal Sushil Tandukar, Secretary Santosh Neupane, Pramod Shrestha Goofy, Binod Tandukar, Sunita Deshar of WIMA Nepal and Marketing Manager of Suraksha Lubricants Anoj Bhandari also had their presentations. The conference was attended by businessmen and guides, tour operators, riders and operators of various travel agencies and members of NASA Nepal.In the first session of the conference, for the first time in Nepal, the training and examination of Touring Marshal was also taken.

At the end of the event, a slow bike racing competition was organized and the winner was given a gift hamper by Phurba Lama, Managing Director of Suraksha Lubricants.

On 1 August 2017, the 19th Congress of Americas for Mobility and Sport started in Toronto, Ontario, with representatives from Members Clubs throughout the Americas present.

FIA President Jean Todt opened the Congress by highlighting the importance of the event: “The annual congress is fundamental. I especially appreciate the opportunity it provides for me to meet you and to hear about the news and progress of your clubs, as well as the opportunity it gives us to think together about the future of motorsport and mobility.”

Mr. Todt then laid out the agenda for the sport and mobility portions of the Congress.

Speaking about the mobility section, Mr. Todt highlighted 3 key topics for the congress. These included: strengthening club development through the FIA University Programme, promoting the road safety agenda to meet the ambitious 2020 targets set out by the UN SDGs, and advancing the agenda of sustainable mobility.  Mr. Todt then announced the appointment of Mr. Tim Shearman, FIA President of Region III and Alfredo Albornoz, Director General from TACC, Colombia, to the FIA University Governance board to represent their respective regions. He also announced a new Senior Executive Programme, designed in partnership with Columbia University in New York, which will be held on 1-3 November 2017.

On the topic of Road Safety, Mr. Todt highlighted the ongoing initiatives of the FIA High Level Panel for Road Safety, and invited FIA Regional Presidents to join the next meeting of the Panel on 20 September 2017. He also congratulated the Clubs on their current road safety initiatives and reasserted the key role they have to play that field: “I am proud of the outstanding work done by the Clubs and regions on the ground since the inception of the FIA Road Safety Grant Programme. As you know, I strongly believe, and I am sure you will agree, that motor sport, mobility and road safety walk together.”

Mr. Todt then spoke about the FIA Smart Cities Forum, held alongside the FIA Formula E Championship. “Meeting the challenge of urbanisation is of central importance to FIA Clubs and this platform is a good opportunity for us to promote our agenda on safe, sustainable and accessible mobility in cities”, he stated.

The Congress, which will last until 3 August 2017, is an opportunity for the creation of joint initiatives between Clubs. It will end with a Karting Slalom event for children who are 10 years of age or higher, an event that highlights the importance the FIA places on attracting new talent to motor sport at a young age.

The next edition of the FIA Congress of Americas for Mobility and Sport will be held on 22-24 July 2018 in Montevideo, Uruguay, just prior to the FIA Mobility Conference on 24-27 July 2018.

The Motocycle-Club de France organised a race called the International Cup in Dourdan, south-west of Paris, on September 25, 1904 with the participation from Austria, Denmark, France, Germany, and Great Britain. The race was won by France, but disputes arose over the racing conditions. As a result, the sports authorities of the five countries represented joined together and put forward the idea of creating the Fédération Internationale des Clubs Motocyclistes (FICM).

The birth of this Federation was, however, premature. In July 1906, on the occasion of the International Cup in Patzau, Bohemia, the delegates of the participating countries - Austria, France, Germany and Great Britain - unanimously decided to dissolve the FICM. But, for a question of procedure, the FIC