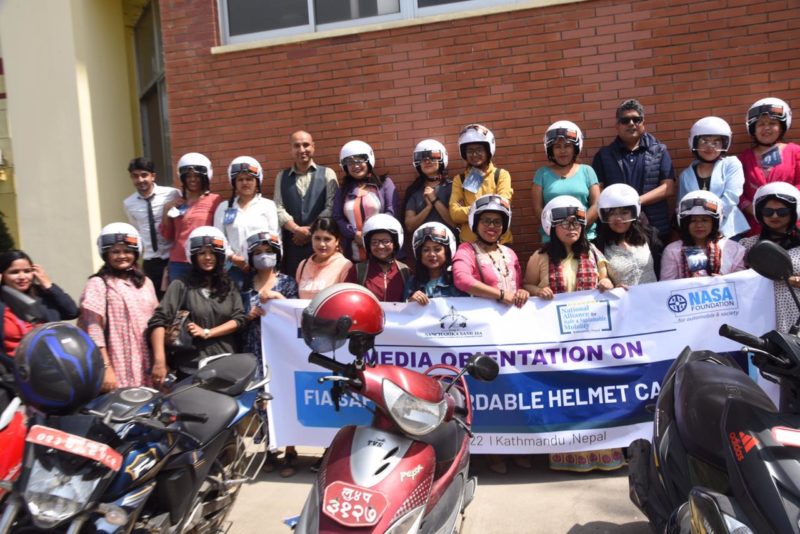 An interaction on safe helmet was held in Kathmandu yesterday in a joint project of the newly elected working committee of Nepal Automobiles Association (NASA Nepal) and Sancharika Group.

In view of the increasing number of road accidents in the country on a daily basis, it is said that 30 media persons including newly elected officials and members of the media group were present at the event. Group officials also expressed their commitment to the road safety campaign.

On the occasion, Govinda Bhattarai, Chief Advisor of NASA Nepal, congratulated the newly elected team of Sancharika Group and gave a presentation on Two Wheel Safety in Nepal. Similarly, the chairperson of the group Vimala Tumkhewa shared her views on the media community and the safe mobility of Nepal while the general secretary of the group Basanti Bastola coordinated the program.

While organizations like SA Nepal, FIA and Global Alliance have been active in the field of road safety in the national and international arena, a commitment was also made to be active in the field of Nepali media. The event featured a presentation on the FIA's Safe and Affordable Helmet Campaign, the quality of helmets, and the need for helmets for the rear. Secretary of NASA Nepal and Vice President of Communications Group also participated in the program.

With the change in Nepal, the way of thinking of the People all over the world and their life style has changed. People are not only limited to their occupation and their business, but they have changed their way of means of entertainment, traveling and their interest towards sports and games. It has been tried to elaborate about the Motoring Sports and its impact in the tourism in Nepal in this article. It is essential to know that Motor Sporting in lay man words mean Motor, Motorcycle, Go-Karting and Auto-Sports related games. It is also known as Motor sports, Motoring, Automobile sports, Touring etc.

Now it’s not the era of taking 3 tourists in 2 moths with the help of 22 Tourist Guides (Transporter) in Everest Base camp. Also the duration for the route of Annapurna Base camp has been decreasing day by day. Now it is time to give alternative to the tourism industry that has changed due to the development of motor assessable roads instead of trekking routes such as “Ghodepani” and “Thorang Pass”. Due to the local as well as national disputes, people have shown less interest towards long duration programmes. Instead they are attracted towards adventurous tourism, creative and entertainment tourism. Likewise due to the globalization of the language and easy communication of the people throughout the world, the duration and the destination of the tourists have decreased. Also, due to the advancement of management system, communication centre and busy schedule of the people, tourism industry is growing rapidly. Thus, it is worthful if we can change our thinking, planning and implementation otherwise we will remain backward.

It has been already discussed that tourists are influenced towards adventurous, short and interesting sports like Rafting, Cycling, Bungee Jumping, Paragliding, Biking etc. This raises the question about the need in the drastic change in the tourism industry. It should be kept in mind that it is now time to treat both domestic and international visitors as tourists and change our classical thinking.

Today most of the headquarters of the districts of Nepal are being assessable by roadways and it is believed that it will get completed by 2 years. Almost 4000 VDC’s of Nepal are reachable through Motor and Motorcycle. No tourist wants to walk in the dusty and chaotic road .If the roads are not developed, development process does not go ahead but if they are developed, the historic tourist trekking routes and trends are demolished. That is why it is a need to start a new trend of quenching the thirst of the natural beauty of Nepal through the use of Automobile like Motorcycle and Motor. How can we forget the history of many countries whose economy is dependent on the concept of “Motoring & Touring”? The similar example can be the starting of Mountain Flight in Nepal whose popularity has reached to the peak.

Isn’t it effective to make “All Nepal Bike Tour” in a month rather than walking one month towards Thorang Pass? Isn’t it possible for the tourism industry to reach Mustang and visit Muktinath in a single day from Kathmandu and plan to visit Lumbini the other day? Is it the correct time to plead due to the shortening of the trekking routes or is it the time to develop new policy to defend this crisis? It may be difficult to read that in the years to come it will be possible to connect roadways nearby most of the mountains of Nepal. People will be busier and the interests of the tourists will be changed by then. Rather than waiting for two days for the clearer day to come to have a glance of Mount Everest from Nagarkot, it will be better to reach Mount Everest in two days and skate in the snow. This is not impossible and its time to take this in mind that this day is not so far from us. That is why the whole world has begun taking Motoring and Touring as a similar term and Biking & Hiking likewise.

Nepal is a beautiful country having diverse geographical features. There are places in Nepal which is in the sea like ‘Kechana” to the highest mountain “Sagarmatha”. There are places in Nepal where there is tremendous hotness (Lumbini) to the mountain range which is always full of snow. Also there are unbelievable places like Chitwan National Parks, Ghodaghodi, Rara Lake and Fewa Lake. We have Arun Valley which is the deepest valley of the world. We have Singa valley which is said to be the centre of civilization. We have Janakpur as the workplace of King Janaka. Isn’t it possible for the tourists to know about all this places at a single visit? How will he define Nepal to the rest of the world if the tourist can have breakfast at Kechana, have lunch at Bhedetar and can reach Arun Valley to have dinner? This is not a dream, but it can be true too if we change a little bit of our thinking, or way of working, our originality and Creativity. And the only ultimate key is good mixture of Motoring & Touring which is the simplest and important means.

Today most of the places of Nepal are organizing functions, mela, feastivals and programmes regularly. Since the media, money and mind are being concentrated at Kathmandu, these functions, mela, feastivals and programmes are not getting required advertisement. Today Kanmanduites are unfamiliar about Jiri mahotasab which makes them forget about Switzerland with its beauty. The people of Pokhara are not familiar about the Elepant race and Elepahant Polo that is being organized at Chitwan. Motoring will eradicate such problems and increase the prospects of internal Tourism.If we could take Motor Cycle rally from Kathmandu to Shree Antu Mela, what would be the reaction of the tourists and the local people there? Whether it s Pokhara-Jomosom Motor rally or Lumbini-Jumla Bike race, it increases the adventurous and touristic environment. There is the fun of both sports and touring. There is a different position of Motoring and Touring in the field of literature. Many story, poems and novels havbe been written in the similar context. It has taken the special position in the field of movie in the whole world. “the Motorcycle Diaries”, in which the life history of revolutionary actor Che Guevara has been mentioned is the golden example of this.We have hit songs like Ghumna Jau Ghumna jau dhulikhel, Taxi Gudaudai, Motorcycle ma ghumauchhu maya lai, Sajha bus ma jo pani chadhda chha, Bato Khulyo Motor chalyo Jumla kalikot etc. which are still are regarded as some of the greatest hits.

It is said it is better to see it through our own eye rather than reading it hundred times in the book. Can’t we Nepali manage ourselves to have an opportunity to feel and quench or interest of viewing the holistic and natural view of our country through the use of Motoring? Let us imagine how much the foreign tourists who enjoy Lisbon-Dakar Motor Rally would have visited Nepal if w could have organized Kathmandu-Ramaroshan Rally.

Lets us not be so much optimistic that the foreign tourists will keep on visiting Nepal just to see the Tundals of the Kathmandu Valley and the art of pottery. Also, the trend of taking a porter to visit Nepal also has been outdated. Let us think through a cool mind why the tourists do not take Kathmandu-Chitwan as a trekking route? Why we don’t walk from Pokhara to Lumbini? Now let us think Kanchanjunga can also be likewise. Tourists can reach Manang in a day from Kathmandu. Can tourism be promoted in such a situation with the same primitive strategy? And how will the tourism sector contribute for the New Nepal? I feel astonished when I analyse this primitive thinking of these strategy makers and the concerned people, who don’t wish to change themselves from this old thinking. If not, then why they don’t prepare themselves through a new strategy? Now it’s getting late to change ourselves with respect to the change of the tourists. Some while ago, it took a month to cover 300 km trekking, now it is possible to explore 1000 km tour with the same expenditure.

Today, people all over the world from developed county to developing country, from far away America to nearby country India, the words “Adventurous tourism”, “Adventure Sports”, “Motoring” and “Touring” are the hot topics. In the same manner the preparations are going ahead and the outcomes are positive to. The crooked roads, uphill roads, conjusted roads, muddy roads should be thought as burden only, but we should make them a way of attraction fro the tourist if some techniques are applied. Rather than pleading to make the roads broader and metallic pitched, it would be better if we could make it a source of income and profit. It is our luck that our road, geography, nature are the moral boost up for the Motoring Sports. Are the concerned sectors of Nepal aware of this thing?

Analyzing this situation, Nepal Automobile Sports Association (NASA) has been established and registered in National Sports Council to develop Motoring and touring through the means of sports. It has been going ahead with the slogan of “Road Safety” in the whole world but NASA has aimed to take it as an adventurous and tourism promoting game.

Thus, it is not impossible to develop Motoring as the most important and popular game in Nepal and a means of promotion of Touring if NASA would be continuously supported and helped by National Sports Council, Nepal Government, Automobile sector, Tourism related organizations, Media Houses etc.

One thought on “Sports Tourism”