Nepal Automobiles Association (NASA) has officially launched the FIA Safe & Sustainable Helmets Campaign in Nepal on 24th September 2021. Under this campaign various public awareness programs will be organized across Nepal and more than 300 UN standard helmets will be distributed. 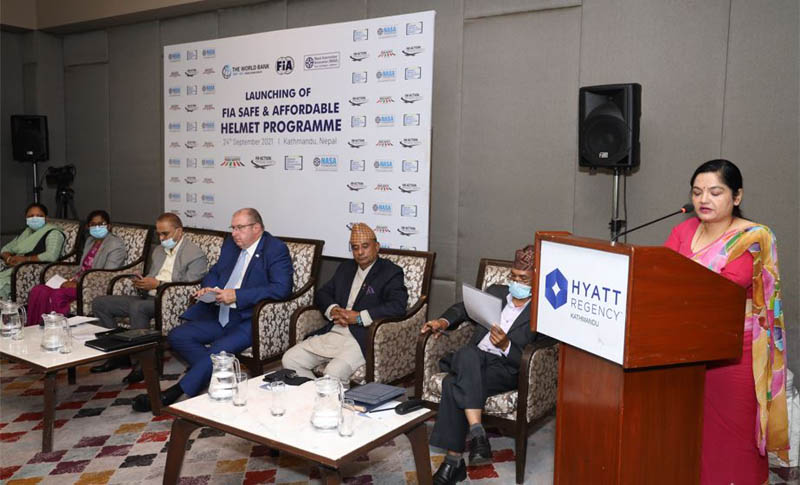 At the beginning of the program conducted by Bhagwati Sedhai, Chair of NASA Foundation Nepal, Govinda Bhattarai gave a welcome speech on behalf of NASA Nepal while FIA ​​President Jean Todt gave a message of good wishes through virtual medium.On behalf of the World Bank, Hartwig Schafer informed about the impact of road accidents on Nepal's economy and the necessary steps to be taken for its prevention.

Similarly, Yogesh Bhattarai, Rangmati Shahi, Indu Sharma, Bhavana Subedi and Rabindranath Shrestha said that they would move ahead in the field of road safety and formulate an action plan in the coming days. The guests present on the occasion unveiled the UN standard helmet provided by FIA to Hemant Tiwari of Safe and Sustainable Transport Nepal, Devu Parajuli of National Federation of Disabled Nepal, and Ramhari Silwal of Higher Institution and Secondary Schools Association of Nepal. In view of the increasing number of two-wheeler accidents in Nepal, the campaign has been launched with the objective of minimizing the damage caused by accidents, spreading awareness about safe helmet use among the people and implementing the National Helmet Standards Act.